If you are asked to think about someone who is very rational, what kind of characteristics come to mind? Your imagined rational being is likely to be someone very logical and intelligent; someone who is objective and can be reasoned with; possibly someone very level headed and stable. In other words, this logical someone is not likely to be an ‘emotional’ wreck! Why do I say this? Because the characteristics we generally associate with rationality rarely leave much room for emotions. If you look at characters in movies and TV series, those who are portrayed as extremely competent, intelligent and rational, often lack a certain degree of emotionality – and this lack of ‘emotion’ helps them make smart and calculated moves.

As an example, let’s take a look at Mr. Spock from Star Trek. This extremely competent, capable and intelligent character is from planet Valcun where everyone lacks emotions. As a result these species from Valcun are highly logical, intelligent and super rational. Spock is the one his captain turns to whenever he’s looking for logical advice. But, because Spock is part-human his emotions can occasionally overcome reason. He describes this state as being “emotionally compromised.” Looking at characters like Spock, you may think that rationality and emotions must remain polar opposites – that having one somehow weakens the other. But that is not the case. If someone completely lacked emotions, they couldn’t be rational because they would not be able to do much of—anything, really.

Emotions are what drive us – from getting out of bed, working towards our goals, to being protective of our children and taking precautions against possible dangers. Emotions are built-in survival mechanisms, without which the question of rationality would cease to exist. In his book “Descartes’ Error”, Antonio Damasio talks about one of his patients Elliot, who lost a large part of his frontal lobe during the removal of his brain tumor. After the surgery, what Elliot had lost along with portions of his frontal lobe was the ability to prioritize. He could not hold down a job because he would keep shifting between tasks, unable to decide what was more important. People with damages to their frontal cortex lose the ability to care or in Elliot’s case, their ability to prioritize.

Emotions help us to set priorities, like going to college, having a career, getting married – they tell us what we care about. Thus, a loss of emotional capacity will not suddenly turn you into a smart intellectual creature like Spock, instead it will cause your rationality to fail. The famous example of Phineas Gage is a case in point. Our rationality exists because we have emotions. But taking a rational decision has nothing to do with being emotional in the moment. You may punch your boss in burst of anger, which is not always the most rational thing to do, but that doesn’t mean that anger itself is irrational. Our decisions are influenced by how we evaluate things. These evaluations depend on a number of things, one of which is how we feel at the time i.e. our current emotional state.

As important as emotions are, they do, at times, interfere with objective judgments and that was shown by Schwarz and Clore (1983)1. They surveyed people about their life satisfaction and found that people who were in a good mood because of being surveyed on sunny days reported higher levels of life satisfaction than those who were in a bad mood because of being surveyed on rainy days. This is a common phenomenon that we all experience. We tend to attribute our current emotional state to whatever is the focus of our attention. There is nothing wrong with this when the object of our attention is actually the cause of our emotion. What makes this irrational is that we have a tendency to wrongly attribute our feelings even to things that are completely unrelated. 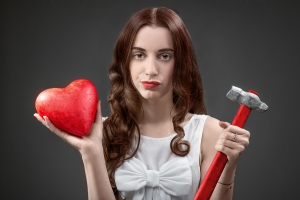 The structure of our brain can tell us a lot about our rationality. From an evolutionary perspective, the prefrontal cortex which is responsible for conscious decision making and judgments is relatively new. Thus, when confronted with a choice of options, an emotional response comes more readily than a logical one. The neuro economist Ernt Fehr has done extensive research on the neural pathways involved in decision making. He used fMRIs to study brain activity of participants playing games involving finance and economics. His research shows that when a player takes calculated, logical decisions to take down an opponent, emotional and social pathways in the brain also light up. This finding has also been confirmed by other researches that suggest similar links between rational and emotional decision making. In other words, no matter how much it looks like it, our decisions aren’t actually completely rational. So, yes, we’re not really as logical as we like to think!

One of the most common reasons why our rationality fails is because we are loss aversive. Thus, our judgments are easily influenced by whether something is presented as a gain or a loss (framing effect), something that advertisers love to cash in on! This effect is nicely illustrated in a research by Levin et al (1998)2 in which subjects were urged to participate in some activity (e.g. wearing a seatbelt). It was found that individuals were more likely to participate when the plea emphasized the disadvantages of not engaging in the activity as opposed to its advantages.

An interesting aspect of our rationality can be understood by looking at the Wason Selection Task. Imagine a deck of cards in which each card has a color on one side and a number on the other. There is only one rule to be remembered: if a card has an even number on one side, it must be red on the flip side. The dealer places four cards in front of you: a three, an eight, a red card and a brown card. Which card or cards must you turn over to prove that the rule is true?

In 1977, Peter Wason conducted a slightly different version of this experiment and though the puzzle is quite simple, he found that less than 10% of the participants got the answer correct. Now, for the fun part, let’s look at your answer. If you answered three or eight, or only the red or only the brown card then your logic was duped like 90% of Wason’s subjects. The color on the back of the three card doesn’t tell you anything, and the red card can have any number on its back without violating the rule. The answer is to turn over both the eight card as well as the brown card. If the eight card doesn’t have red on its back, that violates the rule. Similarly, if the brown card has an even number on its back, that also violates the rule.

Research has found that the same task becomes much easier when looked at in a social context. Suppose you are a bartender and you cannot let people under 21 buy alcohol. The four cards, in this case, have a drink on one side and the age of the person drinking it, on the other. So your cards show: 26, wine, coke, 17. Which of the cards do you turn over to see if the drinker is obeying the law? The cards 26 and coke tell you nothing. So you must check the age of the wine drinker and the drink of the 17 year old to see if the law is being broken. Thus the answer is wine and 17.

The same problem now seems pretty simple, doesn’t it? Were we completely rational, we would have found the classical Wason Selection Task just as easy as this one since both are designed on the same principle. The fact of the matter is that the same logic and rationality that helped us survive in our ancestral environment can sometimes be way off the mark. Human rationality is an area of ongoing research, generating overpowering evidence of the sure fact that our logic is far from perfect! The research in this area is one of the hottest topics in modern psychology and the debate of emotions and rationality is unlikely to be fully resolved anytime soon!

Syeda Hajrah Razvi is a freelance writer, and she currently lives in Pakistan.