Technology never ceases to remind us that time waits for no one. There is always a gap between new technology users and those who prefer to get by with the same old gadgets, in the same old ways. And, many tend to say that “you can’t teach an old dog new tricks” when talking about new technologies and “the senior” crowd, but is this really the natural way of things? Is resistance to change a natural psychological reaction? Or is it particular to a specific age group? And ultimately, do the benefits of modern technology outweigh the discomforts they bring, especially for our growing senior population?

Let’s start by pointing out that the assumption that only older folks are out of touch while young people are always in the know is a common misconception. Simply because people from all age groups admit to feeling overwhelmed by the constant need to adapt technologically.

This is because the reluctance to try new things is not necessarily age related. Humanity’s tendency to be wary of “the new” is referred to as “resistance to change”. It is one of our specie’s great contradictions; on the one hand we crave knowledge and new experiences, always seeking to expand our perception of the world, and on the other we desperately desire a sense of stability and familiarity in our lives. When it comes to technology, this fear is called “innovation resistance”. Customers will hear of a new product and deliberately avoid it whether it appears to be an improvement on the existing technology, or not. One reason for this is that new products are churned out constantly to make a profit, regardless of whether or not they are actually all that much more useful. Overtime, making some consumers disillusioned by the constant ‘technology’ being pushed at them.

We are all plagued by some anxieties brought on by our electronics, such as a fear of missing out (known to the online world as “FOMO”) on everything that is going on, while also becoming overwhelmed by all the information available. The good news is that in spite of all this, our technology related stresses are, neither as new nor as hopeless, as we may think. Innovation resistance has been around since the invention of the wheel and we have mostly managed to survive it.

After ruling out the number of seniors who experience innovation resistance and “techno fright” like the rest of the population, there are those who are not actually afraid of technology, but just don’t see its absence from their lives as a bad thing. But even more so than personal preference, one of the most common issues holding older tech users back from getting more technologically advanced is the difficulty in using new gadgets that do not take certain age related changes into account. 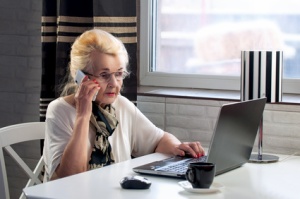 In the past, designers for technology and software have often overlooked the aging demographic when developing their products, not taking into consideration age-related changes over an individual’s lifespan. Luckily, developers are catching on to these issues and trends and have begun developing new user manuals and interfaces for digital devices to specifically accommodate our world’s growing and aging needs.

Many seniors who push themselves to learn to competently integrate new technologies into their lives say that once they do, it becomes an important part of their everyday interactions and relationships. Keeping them connected, engaged, and in turn motivating them to learn more. Computers and other digital devices have come a long way, now they are a part of our everyday lives, they live with us and so they must grow up with us! Adjusting the way they are conceptualized, designed, and created to accommodate the individual through a complete lifespan is crucially important because we need to bring the benefits of technology to all age groups at any given time, for now and well into the future.

2 thoughts on “Our Aging Technology”